We’ve selected what we feel are the key examples of World Skyscrapers. We aim to include tall buildings that are interesting and of exceptional quality.

We have 6 pages of World Skyscraper selections. 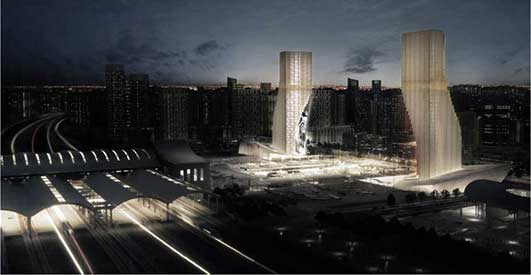 photo : Mathias Beinling
World’s Fastest Elevators
Passengers are catapulted at a speed of 1,010 m per minute, or 60 km/h, from the 5th to the 89th floor of Taipei 101. The ride lasts just 37 seconds, at the end of which passengers step out already 382 meters above the ground at the observation floor of Taiwan’s tallest building.

photo : Gehry Photos
Emporis Skyscraper Award winner for 2012
This tower building in New York City is the winner of this annual architecture prize for new skyscrapers. The winners were chosen from over 220 skyscrapers. It is the first skyscraper by the world famous architect Frank Gehry.

26 + 23 Nov 2012
Sky City Tower – World’s Tallest Building
Construction is due to start on the world’s tallest building in Changsha, China.

image : Foster + Partners
50 United Nations Plaza
Construction is underway on the first residential tower by Foster + Partners in the United States. Developed by Zeckendorf Development with Global Holdings, the 44-storey luxury apartment tower occupies a prestigious location within the green setting of United Nations Plaza, with views of the celebrated modernist UN Headquarters building, the East River and the Manhattan skyline.

In January of each year, CTBUH publishes a review of tall building construction and statistics from the previous year. The annual story is becoming a familiar one: 2007, 2008, 2009, 2010, and now 2011 have each sequentially broke the record for the most 200 meter or higher buildings completed in a given year. Once again, more 200 m+ buildings were completed in 2011 than in any year previous, with a total of 88 projects opening their doors. It is now foreseeable – indeed likely – that the recent trend of an annual increase in building completions will continue for the next several years, perhaps even through the end of the decade, due in large part to China.

In addition to profiling the tallest buildings completed in 2011, this study examines continuing shifts in the tall building industry and profiles several dominant and emerging construction markets. What surprise city completed the most 200-meter buildings in 2011, surpassing traditional tall building centers like Dubai, Shanghai, and Singapore?

Will the already-remarkable Chinese market continue to expand exponentially and further dominate the skyscraper typology? Are there other, unrealized markets that are yet to discover the benefits of building tall? These and many other questions are examined and answered in this study.

Some of the world’s highest skyscrapers + background on earlier skyscrapers:

image © Adrian Smith + Gordon Gill Architecture
To be the world’s tallest building, in Jeddah, Saudi Arabia, near the Red Sea.
At over 1,000 meters (3,280 feet) and a total construction area of 530,000 square meters (5.7 million square feet), Kingdom Tower will be the centerpiece and first construction phase of the Kingdom City development on a 5.3 million-square-meter site in north Jeddah. The tower’s height will be at least 173 meters (568 feet) taller than the world’s current tallest building, Dubai’s 828-meter-tall Burj Khalifa, which was designed by Adrian Smith while at Skidmore, Owings & Merrill.

photo © Andrew McRae
492m – 1614ft / 101 storeys
Shanghai World Financial Center – construction info
Developer: Minoru Mori
Due to be tallest building in the world briefly in 2008 (ie tallest ignoring spires), but the building has no spires proposed at time of writing

Guangzhou TV & Sightseeing Tower, China
2009
Design: Information Based Architecture
due to be 610m