image © Gehry Partners
Colburn School Los Angeles
The Colburn School, LA’s World-Renowned School for Music and Dance, unveils Frank Gehry Design for a transformational expansion of its campus. The Gift from Terri and Jerry Kohl adds a new performance venue, “A Hall for All,” to the celebrated cultural corridor of downtown LA. $270 million raised to date in support of concert hall and dance facilities to benefit Colburn students and the community.

Jul 11, 2017
Shortlist for landmark Centre for Music in London

DS+R are shortlisted to develop a concept design for a new concert hall in the City of London. The Barbican Centre, London Symphony Orchestra and Guildhall School of Music & Drama are leading the competition, backed by £2.5million in funding from the City of London Corporation: New US Building by Frank Gehry

The Philadelphia Museum of Art begins a new phase of transformation and renewal, supported by a $525 million campaign. A key part of this campaign, the Core Project will create a significant amount of new public space within the footprint of the landmark building and add 23,000 square feet of new gallery space for the display of the collection. “The Presidential Medal of Freedom is not just the nation’s highest civilian honor — it’s a tribute to the idea that all of us, no matter where we come from, have the opportunity to change this country for the better,” said President Obama. “These 21 individuals have helped push America forward, inspiring millions of people around the world along the way.”

In the announcement, on November 16, 2016, the White House described Frank Gehry as “one of the world’s leading architects, whose works have helped define contemporary architecture.” The declaration also highlighted Maya Lin’s contributions to environmentalism, and her Vietnam Veterans Memorial in Washington, D.C.

Architects Mies van der Rohe, Buckminster Fuller, and I.M. Pei have received this award in the past.

This Broad Beach property went on market in 2013 for $57.5 million. It is back for sale now with a $33.9 million asking price, reports curbed.com. The six-bedroom residence by architect Frank Gehry includes plenty of unique features and is located on a prime stretch of beachfront. The 11,413 sqft residence over three levels was built for insurance executive Burton Borman in 1989 on a prime 1.46 acre lot with 160 feet of beachfront.

It features a rather unusual mushroom cap at the center of the house, and an impressive spiral staircase. A lap pool and tennis court plus generous patios at each level help create a feeling of luxury. Frank Gehry (1929-) was born in Toronto, Canada and has become a naturalised American citizen. image of the architect received Sep 2003 Biomuseo Panama City
The Biodiversity Museum: Panama Bridge of Life, the architects first design in Latin America, located in the country from where his wife originates. photograph © Kenneth Johansson Photography
This is Frank Gehry’s house, a key building for understanding his approach to architecture and design – using industrial materials in new ways, assembling building form almost like an artist such as Kurt Schwitters.

photo from facebook
Facebook Campus Project
Approval the firm’s design for the Expansion Of Facebook’s Headquarters in Menlo Park, California. the project is located on the former Tyco Electronics site. 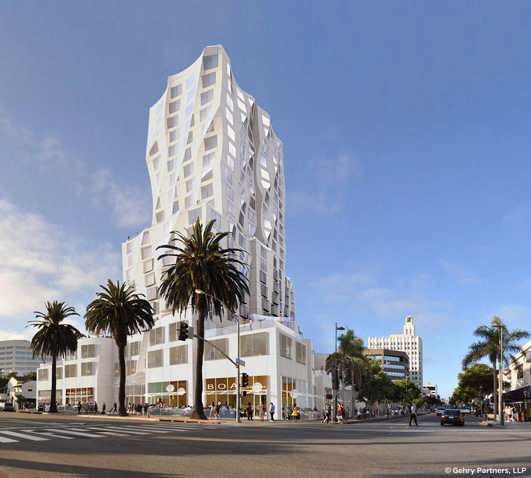 image © Gehry Partners, LLP
Ocean Avenue Project Santa Monica
This building design reminds me of the architect’s skyscraper in New York (Eight Spruce Street) with its twisting fluted form, though here is is mdoelled in a white palette more suitable to the sunny Californian context. “After 25 years, I am excited to finally design a project in my hometown of 40 years,” said the celebrated Santa Monica architect.

photograph : Gehry Photos
Emporis Skyscraper Award – 6 Dec 2012
New York by Gehry at 8 Spruce Street has won this architecture prize for new skyscrapers, beating over 220 towers from around the world. This building – clad with a flowing stainless steel facade – is the first skyscraper by architect Frank Gehry. 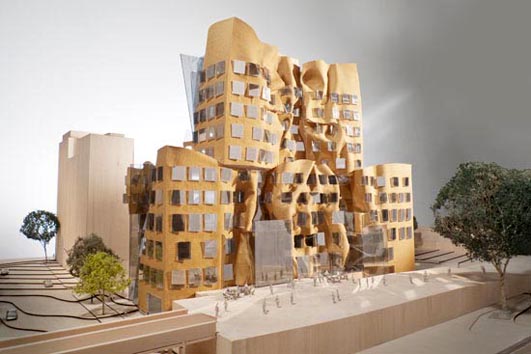 image : Gehry Partners, LLP
Dr Chau Chak Wing Building
2 Dec 2012 – Lend Lease, one of Australia’s largest contractors, has been appointed by UTS to build the Dr Chau Chak Wing Building aka ‘Gehry’s Tree house’.
To open in mid-2014 at a total development cost of $180 million, the building will house the UTS Business School. The UTS building will be 12 storeys high.
One of the key construction challenges presented by the project is its unique, undulating brick façade, comprising of 320,000 bricks, all laid by hand in situ. The bricks, a reference to Sydney’s sandstone heritage, will sit on top of a steel substrate.

photo : Philip Greenberg
The exhibition marks a milestone for Hong Kong’s arts and cultural scene, and pays tribute to the work of one of the world’s most important and distinctive architects, whose bold designs have changed the face of architecture. Cited as one of the most culturally influential people in the world in the last 15 years by Wallpaper magazine, this Los Angeles architect has redefined the boundaries of architecture.

photo : dbox
Rising to 870 feet, Frank Gehry’s first skyscraper, the 76-story New York by Gehry, with its undulating stainless steel cladding shaped to look like draped fabric, is now the tallest residential building in the Western Hemisphere, and an inspired addition to the Lower Manhattan skyline.

image © Adrian Welch
Maggies Centre Dundee by Frank Gehry – photos
the US architect’s reinterpretation of a Scottish Broch: signature architecture of shiny surfaces on ‘vernacular’ base. The architect was selected as architect to design Dundee Maggies Centre by friend Charles Jencks and his late wife, Maggie Keswick-Jencks – who died of cancer and set about creating civilised buildings for people learning to cope with cancer.

images of the architect received Sep 2003

Frank Gehry is Design Principal for the firm of Gehry Partners. Before founding the practice, Frank Gehry worked with architects Victor Gruen and Pereira & Luckman in Los Angeles, USA, and with André Remondet in Paris, France.

He was raised in Toronto, Canada. He moved to Los Angeles in 1947 with his family. Gehry received his Bachelor of Architecture degree from the University of Southern California in 1954, and he studied City Planning at the Harvard University Graduate School of Design.

As well as designing stunning buildings, Frank Gehry has made many designs for cardboard & bentwood furniture.

He was the Pritzker Prize architects Winner in 1989.