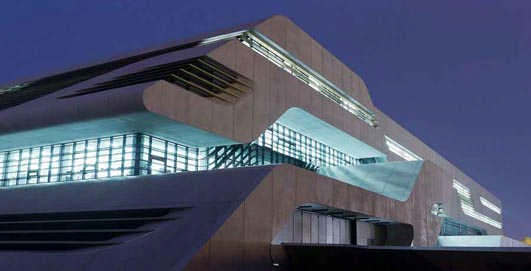 If I named this building after a quote from one of the greatest authors of Humanism, it is because public investment is not only a response to the needs of the moment, in this instance re-housing the archives and multimedia library of Hérault, but also a vision for the future of public service and urban planning. When the jury I had the honour of chairing chose Ms. Zaha Hadid’s project, it was first and foremost to offer beauty to the greatest number of people. We didn’t chose it out of boldness, but because we embraced its concept and fluid forms, sensing that with them, we would write a new and magnificent page in the history of the La Paillade district and of Hérault.

Today, the force and beauty of this building is acknowledged by all, within its own architectural grammar. Zaha Hadid has written a splendid story in concrete, glass and steel, whose power and grace fascinate passers-by and visitors alike. The capacity for innovation and outstanding quality of the work provided by the companies involved in its construction made the dream come true. The personal commitment of workers, technicians and engineers fostered a spirit of companionship reminiscent of the enthusiasm of cathedral builders.

Each of us was aware of taking part in a human venture that would last through time.

pierresvives is built to survive the centuries and is already a part of our heritage.

pierresvives is also the setting of an ambitious cultural and civic public service project through which I aim to foster the personal fulfilment of each individual, in the service of social cohesion. 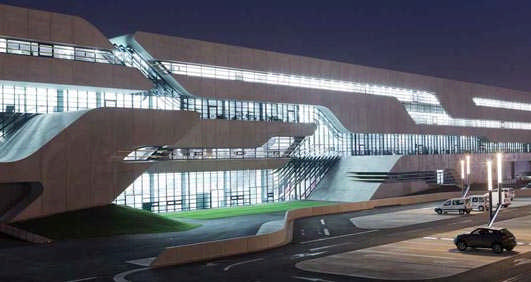 “It is not only the form of a construction that interests us, but the new uses of a building. With pierrevives, we needed to ensure that this large complex would be clearly and efficiently organized.”

“Its conception is one of the most ambitious and comprehensive assertions of our will to create dynamic and fluid spaces. It blends formal geometric complexity with bold structures and an innovative use of materials. Architectural creation involves pushing the boundaries – and I believe that pierresvives is an excellent demonstration of that […]”

“We really wanted the pierresvives project to be a new landmark […]. Today, in the digital 21st century, people’s lives have become flexible and globalized, and we must deal with much more complex social realities than in the industrial 20th century. This requires a new urbanism juxtaposing strata and porosity. The fluidity and transparency of the conception of pierresvives reflects the complexity of the 21st century.”

“I don’t think cities should be like Venice, never changing and never evolving. It is important to introduce contemporary buildings – but this must be well thought out. pierresvives fits in perfectly with the existing urban environment.”

Priztker Prize winner in 2004, the architect Zaha Hadid, and André Vezinhet, Head of the French Département of Hérault, will inaugurate on September 13th 2012 a remarkable new building: pierrevives.

pierresvives is situated in Montpellier, France’s eighth-largest and most dynamic city. It has been conceived as an innovative cultural offer, to meet the needs of the area’s significant economic growth and increasing population of over 1,000 inhabitants per month.

For the Département of Hérault, whose capital, Montpellier, has recently been named one of the New York Times’ « Best Places to visit in 2012 », the commissioner and the architect have planned to concentrate three civic institutions in a single location: the public archives, a multimedia library and Hérault Sport.

Following the call for submissions launched by Département of Hérault in 2002, Zaha Hadid understood at once the specific requirements of the endeavour, and her submission was quickly singled out. Her futuristic structure, a sprawling edifice of swirly white concrete layers and green-tinted glass, takes on the architectural challenge of accommodating an ever increasing public whilst ensuring the conservation of valuable historical archives.

pierresvives building thus embodies a distinctly contemporary vision of culture and public access, actively contributing to the area’s growing reputation as a paradise for contemporary architecture. Hadid’s building will be the cornerstone of the pierresvives ecodistrict whose construction will take place over the coming years.

With this inauguration, pierresvives becomes the third project built by the now internationally acclaimed Anglo-Iraqi architect in France, after the car park and Terminus Hoenheim-North in Strasbourg and the CMA/CGM Tower in Marseille.

Humanism is a doctrine emphasizing a person’s capacity for self-realization.

The word itself springs from « human ». It is a celebration of rationality, a striving to perfect the mind as well as the body.

François Rabelais, the epitome of the Renaissance Humanist, insists on the virtues of instruction. In his opinion, what matters most is to cultivate judgment, since, in his words, « science without conscience is but the ruin of the soul ».

The body is just as concerned as the mind: Rabelais, like Montaigne, emphasized the importance of physical exercise : « It is not enough to fortify his soul; you are also to make his sinews strong » (Montaigne, Essays).

As a tribute to this beautiful spirit, the building was christened pierresvives, the « City of Knowledge and Sports for all », after Rabelais’ words: « I build only living stones – men. » Reflecting this union of body and mind, Zaha Hadid has blended power with fluidity to express the continuity between form and content.

The three entities of pierrevives are each afforded the necessary space to function, yet will be able to collaborate in order to offer a joint cultural and sports programme to the public. The very conception of the pierresvives building allows both rationalization of space and synergy of infrastructures.

The Architecture & Organization of pierresvives Building

“pierresvives, is a tiny chunk of the gigantic oeuvre of François Rabelais, who said: ‘I build only living stones – men.’ For him, one can’t build without putting man at the heart of the need to build.”
André Vezinhet, president of the Conseil général de l’Hérault

pierresvives is characterized by the unification of three institutions within a single envelope. The building is a strong figure, visible far into the landscape, “stitching” the neighbourhood with its urban environment, as well as with the Department.

As one moves closer, the division into three parts becomes apparent through the façade combining glass and concrete of varying densities.

The building has been developed on the basis of a rigorous pursuit of functional logic and ergonomics. The use of glass gives it lightness, yet it is firmly anchored in the territory.

pierresvives was conceived as a succession of horizontal strata: The Departmental archives of Hérault are located at the base of the building, forming its intellectual and terrestrial foundation. The multimedia library above it is slightly more porous, more open to light. This openness embodies its accessibility to the public who come to consults books and documents. Its spatial organization is pleasant and encourages circulation. This part of the building also houses the exhibition space, various public spaces, the “young citizen’s” space and public services.

On top of the building, the treatment of spaces allocated to Hérault Sports as well as the administrative and technical spaces of the common pierrevives resources department make the structure appear even lighter.

On the vertical plane, pierresvives is structured from the centre: the front and back entrances are the converging points of public, administrative and service entrances.

On the western facade, the main public entrance is protected by the enormous cantilevering canopy of the auditorium.

The eastern facade is used for the service entrances reserved for administrative staff and technical services.

The building was conceived to fulfill the requirements of its three functions, while focusing on functionality and accessibility.

Access and circulation within the pierrevives building The main vehicular access road, both for public visitors as well as for staff and service vehicles, comes off Rue Marius Petipa, and provides access to either side of the building. The public access of the western facade leads to the generous visitor car park right in front of the main entrance lobby. The service access is stretched along the opposite side, on the eastern façade.

The main entrance lobby on the ground floor links the three functions and represents the common public space of the archives, multimedia library and Hérault Sport. The exhibition space is located at the back of the building. A large central escalator leads to the first floor, where visitors can access the services that interest them.

Beyond this first floor, the functions of each institution are strictly separated. Each is afforded its own circulation space. Furthermore, the allocation of surfaces takes into account their internal logic and specific needs.

In the basement, a highly symbolic wine cellar is a novel experiment in the conservation of Hérault wines. This archive will stock and monitor one or several vintages of some seventy references over ten years.